The easiest way to sum up workplace organisation is the well known idiom, A place for everything and everything in its place. Workplace Organisation is the action of arranging a work area to promote safety and aid performance. It sets the foundation for continuous improvement, as it focuses on basic organisation to ensure the correct tools and information are always easy to find and access. As a result 5/6S was developed as an easy way to maintain organisation, where the 5/6S stands for Sort, Set In Order, Shine, Standardise, Sustain and Safety.

How to start Operational Excellence

Here are a few starting points to consider:

5S, 6S or ‘A place for everything and everything in its place’ as my father would have said. This clears the decks and sets a foundation for improvement projects with visibility and organisation at its core. It is also rarely opposed.

5S, 6S or ‘A place for everything and everything in its place’ as my father would have said. This clears the decks and sets a foundation for improvement projects with visibility and organisation at its core. It is also rarely opposed.

Set a strategic goal like, new product introduction, and use a cross functional team. Again this allows introduction of new tools and techniques like mapping and business canvas models. As before, coming to an agreed solution will improve shared values and goals, broaden the understanding across departments and deliver a recognisable result that can be built on.

Operational Excellence is dependent on

While Operational Excellence can be started from any point, it will need to be supported with on-going positive support and encouragement. Nothing succeeds like success.  The Lean or Opex classroom is on the front line. People learn by doing. Excellence comes from building on strong foundations, including as many as possible, communicating and coaching to bring people along. As you progress, setting agreed goals and standards becomes the norm with performance measurement ingrained. A good visual management system will deliver visibility, 1 second to see if everything is going to plan, 5 seconds to see any issues, 1 minute to see the improvement plan.

This level of open visibility, communication and supported improvement delivers committed ownership and accountability. It drives on the continuous search to deliver better performance and customer value.

The Benefits of Structured Problem Solving

Other than the obvious resolution of problems and encouraging continuous improvement, problem solving has a series of other benefits.

Cross departmental ownership of the organisational goals above local optimisation

Fully utilises the knowledge and skills of the whole workforce 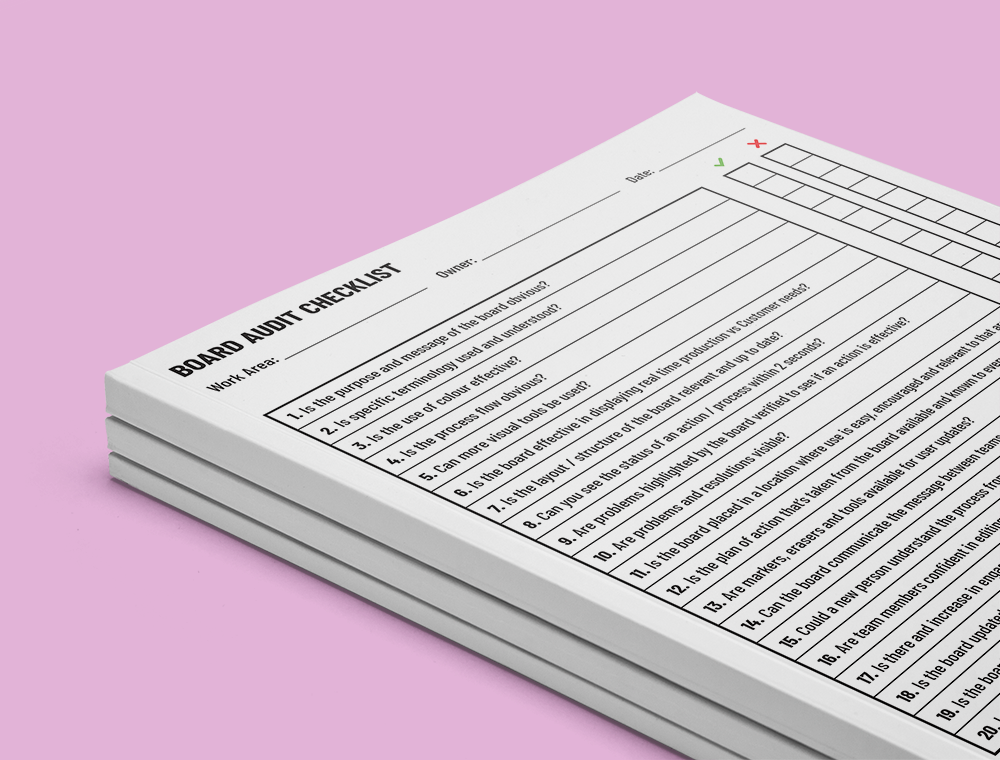 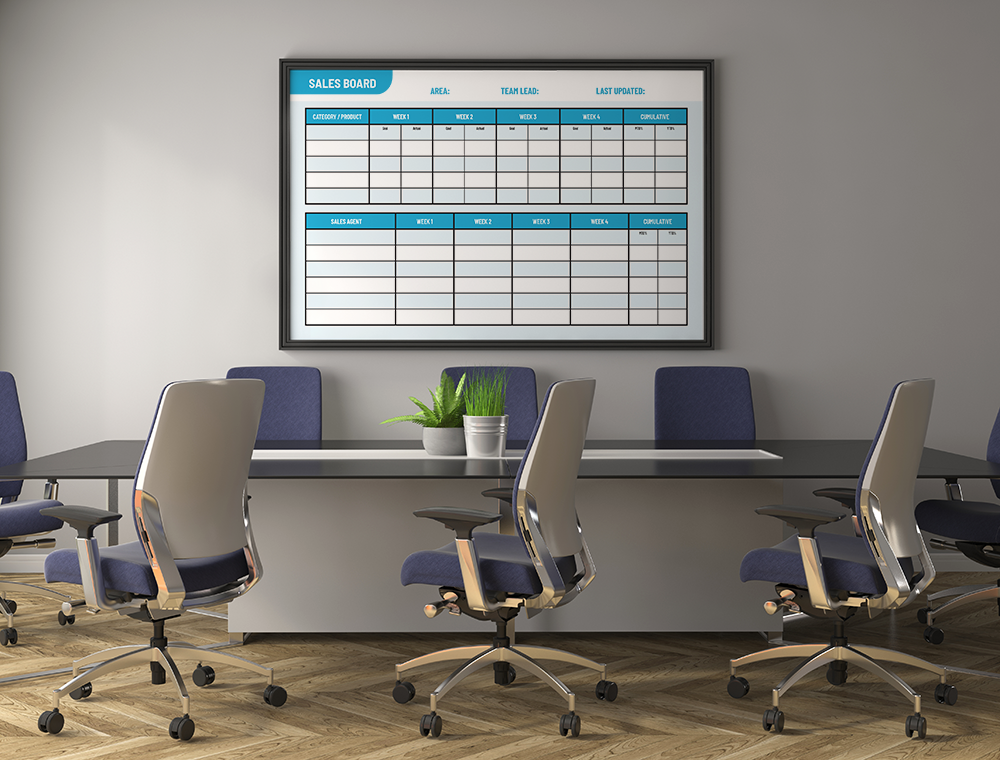 This Product is completely unique to UBIX in that you can evaluate the effectiveness of the board in use, and use this as a reference to suggest improvements to your visual management tools.

This is a general Sales board to track targets and results through the course of a month as well as monitor the targets reached by each team member.

A Sales trend board helps to see the big picture when it comes to reaching targets in areas such as Leads, new accounts, quotes and general sales.

This board helps to schedule each day of the week by the hour. Helps to add structure, productivity and ownership to the work day.

Check out more in our shop

Operational Excellence and the psychological contract.

A study was undertaken in 3 UK Companies in 1997 to measure and document the relationship between Operational Excellence and the psychological contract. The psychological contract is referred to as the unwritten agreement of reciprocal  roles and expectations between the employee and their employer. A break to the psychological contract can result in de-motivation, indifference and mistrust in the company and their values and objectives. The study looks at the three UK companies that are in the distribution, telecommunications and financial industries as they go through significant changes due to the change in the economic environment and with growth in competition.

Such changes resulted in all companies down-sizing and creating redundancies, which subsequently led to a change in the nature of the relationships between the employer and the employee. Before downsizing the employees were part of a relational psychological contract that had guaranteed job security and career development within the organisation. After drastic changes were need, job security was assumed to be dependent on performance, but there was little confirmation to that assumption.

Each of the organisations had detailed the nature of the culture and Operational Excellence changes that were going to lead the company and its employees into a more continuous improvement focused objectives. Such changes included the culture shifting from an authoritarian company to a strict Operational Excellence, continuous improvement focused firm. Instead of automatic job security, job security was promised on the basis of high performance. Instead of targets and goals being set by higher ups, they would be consulted and negotiated with employees as a means to improve engagement and co-operation. Limited feedback changed to a day to day appraisal system, with a promise of rewards. Development of the organisation changed to the development of the individual to boost employability. Instead of compliance and dependence, autonomy and initiative were encouraged. The plans of improvement within the companies were set with good intentions as they tried to de-centralise power and maintain commitment through incentives, strengthened employee voice and participation.

This study puts a focus on how the nature of the psychological contract directly influences the effectiveness of a Operational Excellence and maintenance system. As a result these companies experience poor performance, due to their breaking of the psychological contracts through a series of issues involving values, expected results, objective setting and appraisal systems. With the changes in motion the companies had explicitly fostered new values of teamwork and continuous improvement, while implicitly their intentions were still towards reaching the old financial targets. This result in a misunderstanding and mixed messages of what goals to actively strive for. The biggest issues faced by the companies was in objective setting. The drastic changes the companies had to undergo led to setting of unrealistic and unachievable targets to be reached by the end of the year. Objectives were traditionally set by senior managers and supervisors, which led to the employees feeling that the objectives were imposed rather than negotiated. The new objectives of fulfilling new values were short-term and given low priority and employees stuck to the old framework of objective setting. Due to the restructuring and downsizing of the companies, there was little advancement within the company as a reward to high performance and goal achievement. Achieving high objectives meant that they would be substantially increased the following year, without guarantee that employees jobs were safe, regardless of performance. Evidently, performance and drive to achieve goals decreased.

The ambiguity surrounding performance was only worsened by the poor appraisal systems in place. The appraisal systems which were planned to be day to day were heavily neglected due the higher up avoidance of the bureaucratic nature of the meetings. The subjectivity and variability of appraisal results on employees between managers harmed the credibility of the appraisal process. Some managers also did not want to single out very good or very bad performances and so created a tendency of rating everyone as average. Inaccurate feedback and appraisal led to a mistrust among the employees and instead of generating commitment to the organisation, it became a matter of survival for the employees.

This case study serves as evidence towards the use  of SMART objectives, where specific communication, accurate measurements, achievable goals, relevant targets and information as well as a realistic time frame are key to sustaining a healthy psychological contract between employer and employee, which in term will produce results in Operational Excellence and maintenance.

Kickstart your journey to continuous improvement