The easiest way to sum up workplace organisation is the well known idiom, A place for everything and everything in its place. Workplace Organisation is the action of arranging a work area to promote safety and aid performance. It sets the foundation for continuous improvement, as it focuses on basic organisation to ensure the correct tools and information are always easy to find and access. As a result 5/6S was developed as an easy way to maintain organisation, where the 5/6S stands for Sort, Set In Order, Shine, Standardise, Sustain and Safety.

Get rid of objects or tools that aren’t in use

Maintain items and areas so that everything is working properly

Standardise the Sort, Set In order and Shine activities as expected practice

Maintain the standards to promote and sustain improved performance

Eliminate any hazards to avoid injuries and accidents

The core focus of workplace organisation is to eliminate any unnecessary waste that might be holding back improvement. These Wastes include:

Producing or storing more than is necessary to meet customer demand.

Unnecessary movement of people to get things when they should be located closer to the point-of-use.

Delays between operations and increased machine downtime while waiting for parts, machines, or people.

Over producing something the customer hasn’t ordered, leading to a built up in inventory and overuse of space.

Producing defective products due to inaccurate information or inadequate materials.

The Benefits of Workplace Organisation

Issues are made more obvious in an organised area 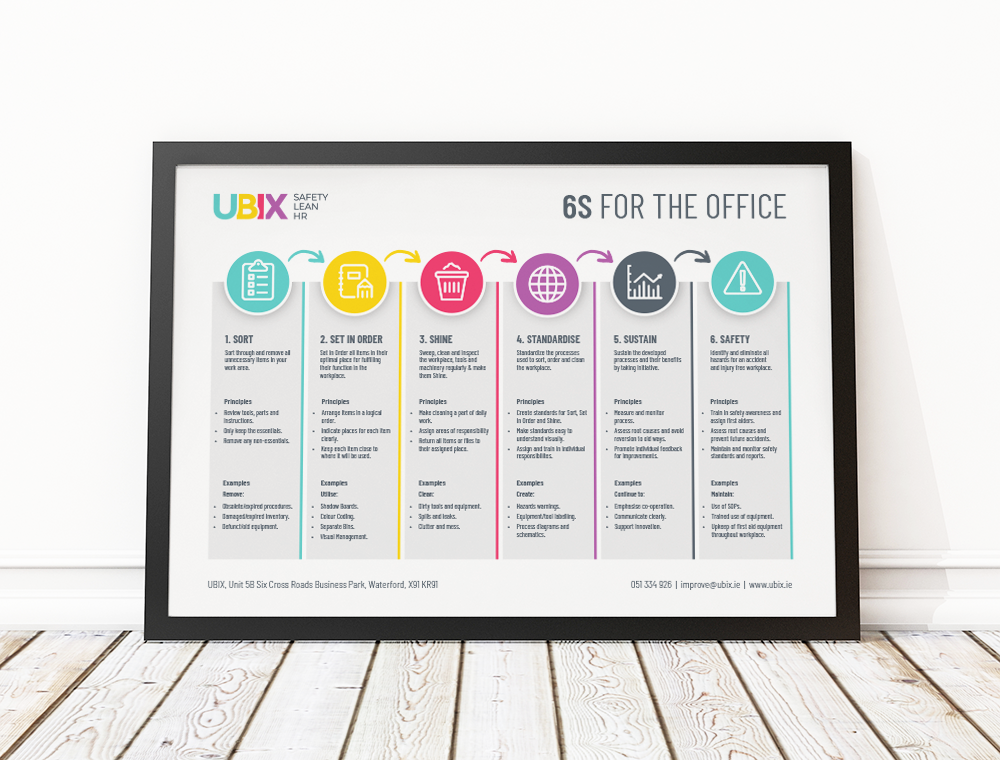 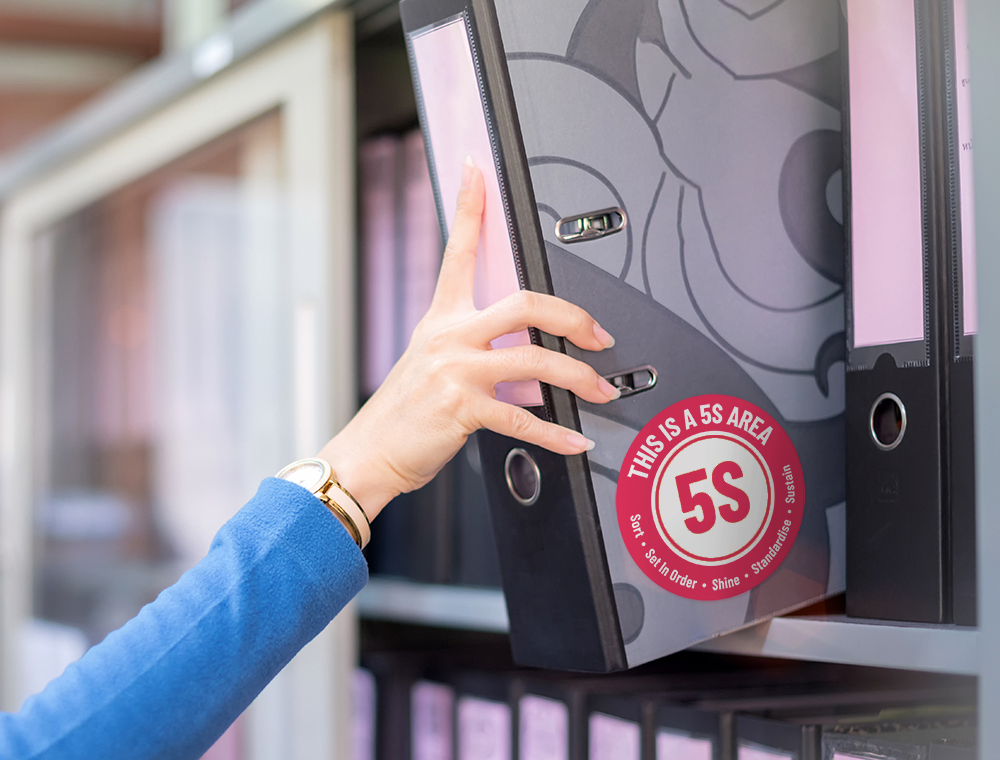 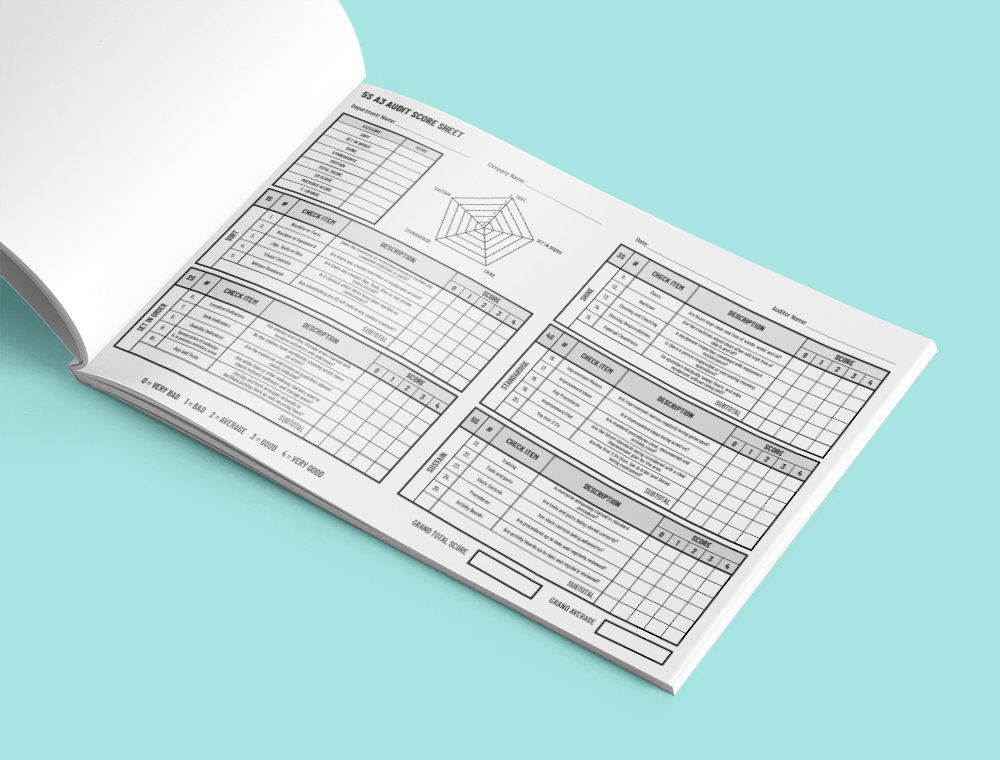 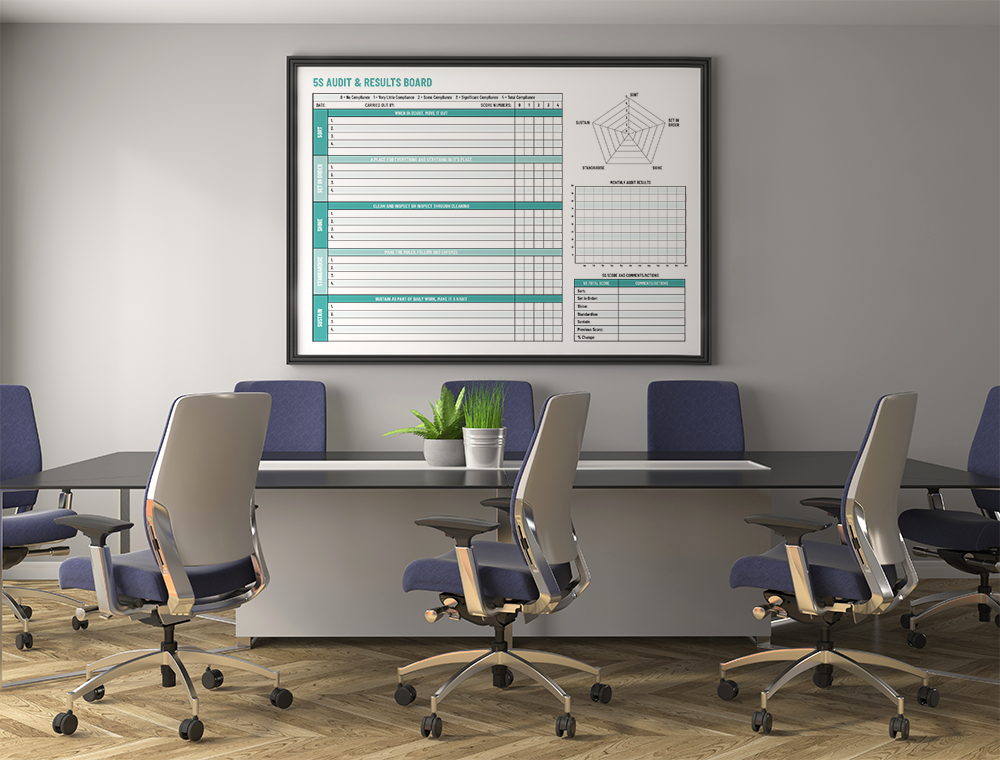 6S For the Office Poster Landscape

5S Audit and Results Board

A Landscape poster that details and instructs on the nature of Sort, Set in Order, Shine, Standardise, Sustain in the workplace.

Available in A4, A3 and A2 with different style options.

A pack of 5S circular stickers available in 5 different colours. These are paper stickers that can be stuck anywhere to show that the are complies with 5S standards.

This A3 Scoresheet used to rate the standards of 5S (Sort, Set in Order, Shine, Standardise, Sustain) in the workplace. These sheets are available in single, duplicate or triplicate pads)

A fully furnished continuous improvement board focused on 5S for you to track audits & compare with the previous weeks/months results. This will highlight any improvements or areas for improvement in 5S (Sort, Set in Order, Shine, Standardise, Sustain)

Available in 5 different colours, so you can organise colours between departments or teams!

The board comes as either a magnetic board or as self-adhesive decal, so you can reuse an old whiteboard you already have.

Check out more in our shop

A study was undertaken in an Australian office to observe how implementing 5S systems would affect the workplace processes and the behaviours of employees. This change was put forward so that the office would better align with the standards of their parent business, the MaST International Group. Changes in the internal culture and behaviours were monitored.

The first step of integrating 5S system was to train all the employees on the basic principles, then the office collaborated in improving each area in turn moving through Sort, Set in order, Shine, Standardise and Sustain from start to finish for each individual area. A number of observations were made once 5S was initiated, including an excessive amount of furniture and documentation. The excess furniture was sold and the documentation archived offsite, allowing the team to reclaim an office space and a meeting room. With the newfound space, workspace was reallocated to drive 5S behaviour, and everyone maintained their own space. Old white boards were found and put to use to record new ideas rather than store them. Due to documentation processing being the function of the office, colour coding was adopted for quick visual observational and information retrieval. Open storage was used to maintain inventory, and an excess of supplies was discovered.

The team realised that reorganising the office wasn’t enough, they had to standardise and maintain their new activities. The team therefore became active in relaying feedback about the new system in place and adopted the mantra if you see it, do it, that initiate immediate action when something is out of place. New staff are trained in 5S to upkeep the standards.

The office had found that there were no skeletons in the closet as nothing can be hidden when an area is organised. It was stated by one of the team members that it was de-motivating coming into a cluttered office and that after it was reorganised there was a sense of relief among staff to have order and a structure. Some team members even stated that they felt 5S had made such a positive difference to the culture of the office that they brought the principles into their homes and cars.

The introduction of workplace organisation had indeed changed the behaviours of the office team for the better. There was an improved satisfaction in coming to work and the general operations were made easier by the streamline nature of the processes due to the elimination of waste and clutter and colour coding documents and inventory for ease of use.

Kickstart your journey to continuous improvement